1 The Significance of the Wall

It symbolised the difference between the western democrats and the eastern communists and the way they thought Germany should be lead. It also symbolised the inner conflict of Germany and the division between ‘free’ or democratic.

The Cold War and Diplomatic relationships

After WW2 ended Berlin was divided into four different sectors for England, France, USA and the USSR. The area surrounding Berlin was controlled by the USSR, which during the Cold War increased tensions between the USA and the USSR. The Western countries (America, France and England) controlled the other half of Berlin and had a capitalist government. The USSR was allowed to keep the Eastern part of Germany and was governed by a communist group. The problem with the separation was that many people in the USSR sector moved to the French, US or English sectors ,meaning that populations in communist communities dropped significantly.

The USSR tried to counter this problem and stop decreasing populations by building a wall. This impacted on diplomatic relationships as it symbolized the different ideological thoughts on how governments show rule countries (e.g. capitalism, communism). Some historians believe that another reason the Berlin Wall was built was in an attempt to increase relationships between the USA and the USSR. Currently, after the end of the WW2, the USA had a number of nuclear weapons which could destroy all of the main Soviet Union bases and so therefore had to improve relationships to protect important areas. The USA agreed and supported the building of the war, as they believed that it helped protect the Westerners in West Germany and Berlin, while they dealt with the remaining Nazi supporters in West Germany.

The fall of the Berlin Wall symbolized a key turning event in diplomatic and government powers as it showed the supremacy of the capitalist government system and brought about the major downfall of many communist countries. After the wall had fallen the USA imposed a larger military force to protect the Westerners in Berlin.

Under the command of General Lucius D. Clay, who was very popular among the Westerners, he led 3 allied battalions of men in to protect civilians from a feared counterattack from the communist countries. In addition, the USA imposed sanctions on the Soviet Union and remaining communist countries in an attempt to convert many of the now defeated countries.

The Berlin Wall’s fall enforced the ideology of the Western countries (capitalism) and symbolized the defeat of what was supposed to be a government which brought about equality for all. This system was ultimately flawed because there will always be people who work too little or too much. The fall of the Berlin wall ended communist rule and allowed capitalism to become the primary government in the modern world. 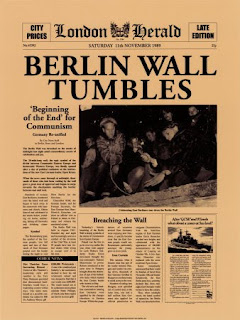 This source is a newspaper from London dating Saturday 11th of November 1989. This primary source demonstrates the views of the British towards the fall of the Ball Wall, what it symoblised and how it affected the political world.

The significance of the Berlin Wall to people’s lives

This Berlin Wall was significant to lives of many people through many ways. It was the center of the lives of every persons living in Germany.

People living in East Germany were unable to leave and people were unable to get many luxuries such as coffee. Many families were separated by the Wall and died trying to get over it.  As shown in source B, the Wall affected people in many different ways. It also shows how the Communists force their ways on East Germans. 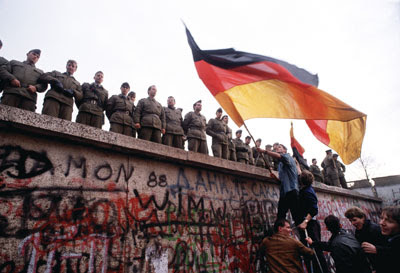 The Berlin Wall meant to many people a loss in human rights and freedom. It meant to Germans back then who was in power. It still shows through the rubble of the Wall, all the sadness and separation that happened in the time the Wall was up.

The wall also affected people outside the Germany who were touched by what was happening in Germany and tried to help. The Berlin Wall was also significant to those who went into the Cold War to help free people in Germany.

This is a primary source and its purpose is to inform and persuade. It is authentic source as it was made a year after the making of the wall. However the reliability is altered as it shows bias, it is stating that the democrats are ruining the  lives of the communists by creating a wall that changes their normal functions.

It shows the significance towards people’s lives and how their everyday situations were compromised. It begins with a group of boys playing a game of soccer when they accidently kick their ball over, what do they do? It also gives imagery to a train is haltered by the wall crossing over the train tracks, how do they cross? All of the events shown in this video help give people understanding of how it was significant in people’s everyday lives.